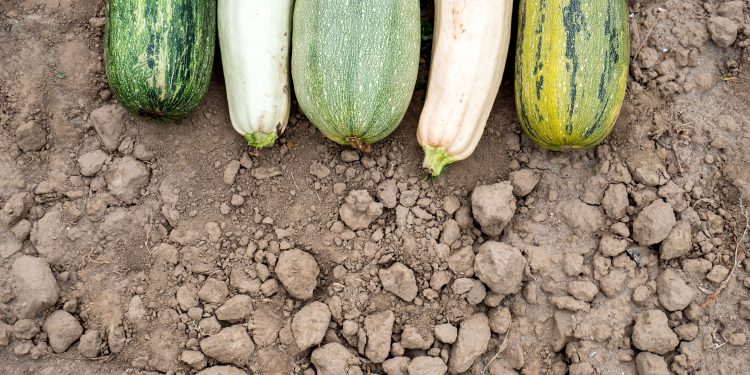 Zucchini is the garden plant that keeps on giving. It’s very easy to grow that it practically grows itself.

But what if you can further increase your harvest by introducing zucchini companion plants in the mix?

Growing Juniper – How to Care and Planting Guide

Eggplant Companion Plants – See What You Can Grow Together

Squash Companion Plants – What You Can and Cannot Grow

10 Hanging Vegetable Garden Ideas and How Getting Started

What is companion planting?

A plant may need less of one specific nutrient while its companion needs it to thrive. This eliminates competition between two plants. Overall, companion planting promotes a healthier garden and reduces the amount of labor as a bonus.

Much of the benefits of companion planting have less to do with actual science but rather learned by observing nature. It is a matter of trial and error to see what works and what doesn’t.

Overall, companion planting is a great gardening method to make sure your vegetable garden will grow healthy plants and even boost crop yields.

When figuring out possible companion plants to grow with zucchini, you can start by knowing how zucchini plants grow to know how to complement it. Doing this research can make sure that the plants won’t compete with each other but rather, synergistically grow and thrive off each other.

Zucchini, also known as courgettes, is part of the squash Cucurbits family including gourds, cucumbers, and pumpkins. It likes well-drained soil with plenty of organic matter.

The placement has to be under full sun and the soil has to be kept evenly moist but not waterlogged. Zucchini needs a lot of garden space and are heavy feeders.

Squash vine borers love zucchini. The adults wake up in summer to lay their eggs at the base of the squash plants. When the eggs hatch, the larvae burrow into the stems of the plants and feed. This cuts off water flow through the stems, eventually killing the zucchini.

With these growth habits in mind, you can select synergic companion plants for zucchini in your garden.

Keep reading to learn about the best and the worst plants to grow with zucchini and how each affects the other.

The three sisters garden planting technique was developed by the indigenous people of North America. They observed that when these three plants are grown together, they just thrive, like inseparable sisters. One sister is zucchini which is a summer squash, and the other two are corn and pole beans.

Corn, beans, and squash are heavy feeders and heavy water plants. They require relatively more nutrients from the soil than the average plant. As companion plants, they can save you garden space, water resources, time, and energy.

The large broad leaves of the squash or zucchini give ground cover to keep soil moisture. The leaves create a shade blocking out sunlight and prevents weeds from invading. It acts like a living mulch which is a plant that covers an area of soil and adds nutrients, enhances soil porosity, decreases weeds, and prevents soil erosion.

The prickly feeling of the zucchini squash leaves also keeps raccoons and other animals away that don’t like to step on them.

The beans build soil fertility through a special type of soil bacteria called Rhizobium. These bacteria pull nitrogen from the atmosphere and bring it back into the soil for all three to benefit from. This is especially useful when growing heavy feeders like corn and squash. The beans bring back nitrogen into the soil feeding its companions saving resources spent on fertilizer, effort, and time in applying.

The beans can climb the tall and sturdy corn serving as its trellis to climb for vertical support. As the beans find their way up into the sunlight, it clings to the zucchini vines and corn to hold giving additional support.

We have tips on how to create a three-sister vegetable garden. The main idea is to grow the companion plants in clusters on low wide mounds under bright direct light.

Peas, like beans, can also fix nitrogen back into the soil. It is best to plant the peas early to enrich the soil in spring and early summer while zucchini plants are still young and small.

Attract Pollinators and Keep Pests Away

Borage with its blue star-shaped flowers attracts beneficial insects and deter pests. Borage in particular attracts bees and other pollinators by the color and shape of its blooms. Planting borage near zucchini will help naturally pollinate the squash to develop fruit.

The smell of herbs like dill attracts beneficial insects into the vegetable garden including ladybugs, bees, butterflies, lacewings, hoverflies, praying mantis, and wasps.

Dill can also deter spider mites and aphids away from zucchini and other vegetable crops.

The smell of herbs like rosemary, mint, and oregano helps keep animals and pests away.

Planting a few garlic tucked among zucchini plants repels aphids, spider mites, and other garden pests. In addition, a spray made with garlic can protect plants and soil against blight disease making it a perfect zucchini companion.

Phacelia has green foliage and blue flowers that can attract pollinators in the vegetable garden. It attracts bees and hoverflies while also killing aphids.

It also serves as a good ground cover or as border plants making them good companion plants.

Instead of heavily spraying vegetables with pesticides, some prefer to go the natural route to control pest infestation in the garden. Plants can be used to attract pests from the main crop being grown and are called a trap crop or sacrificial crop. By planting trap crops near your vegetables the pests will be attracted to the trap crop and would naturally leave the main crops alone.

Nasturtiums have edible flowers with distinct fragrances and are often used as a trap crop to attract aphids, whiteflies, flea beetles, squash vine borers, and other bugs. Nasturtiums are much-preferred food for pests and should be located away from other crops. It can also attract beneficial pollinators into the garden.

Placing them around the edges of your zucchini patch can bring in beneficial pollinators while attracting pests away. 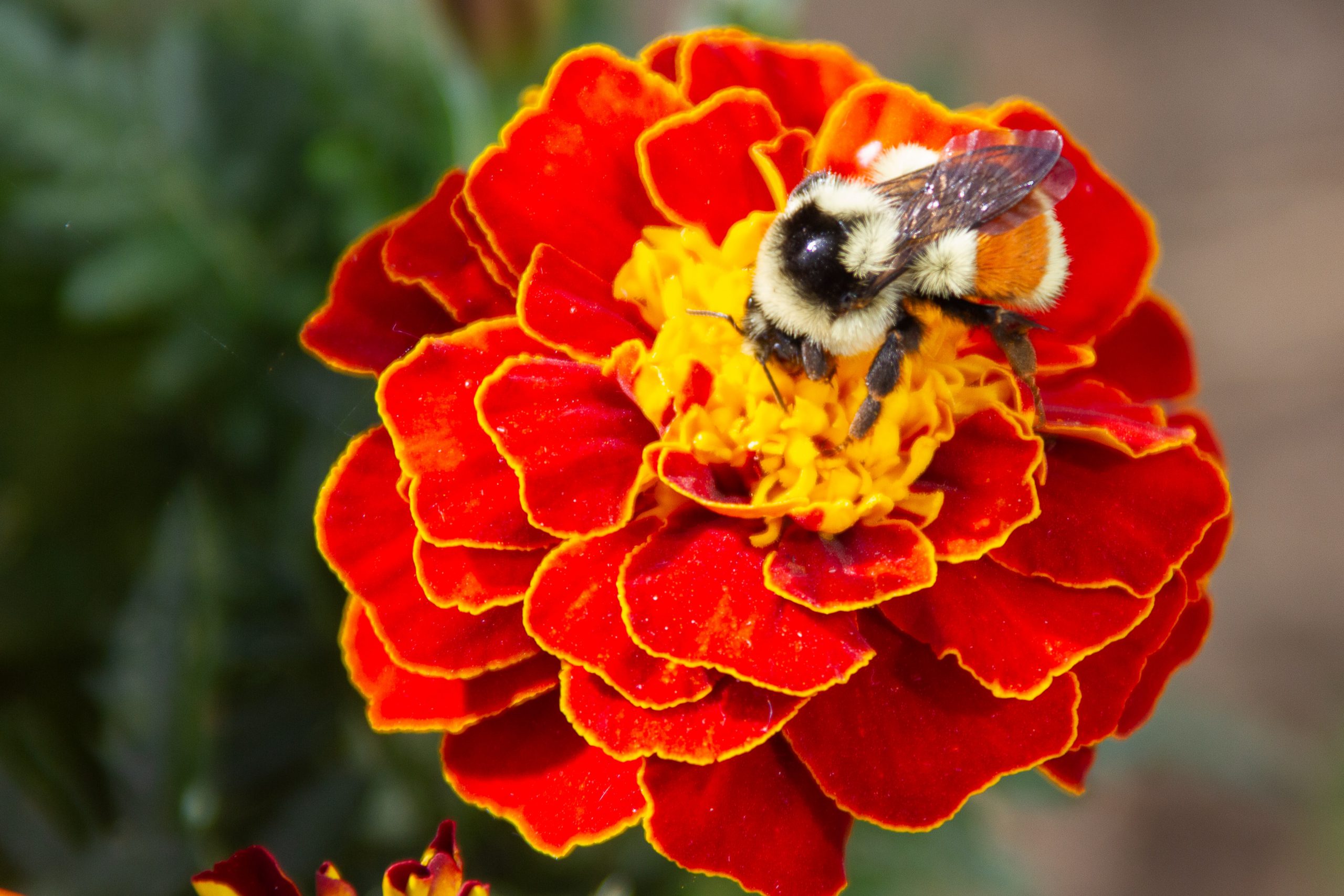 Marigolds function similarly to Nasturtiums in that it attracts not just bees and butterflies, but also beneficial predatory insects to pests. Such insects include ladybugs, lacewings, and wasps that are natural pest control for aphids, squash bugs, Japanese beetles, and others. It would be best to have the Marigolds placed away from zucchinis as a trap crop to repel pests like slugs and snails.

Plants to avoid growing with Zucchini

Potatoes don’t go well with zucchini because both of them are heavy feeders. This means they monopolize the absorption of nutrients in soil and there will be a lot of competition for available nutrients in the soil.

Both are also prone to blight disease in the wet, hot, and humid growing season. Blight is a plant disease caused by a type of fungi such as mildew, rust, and smits. Growing zucchini and potatoes together will only increase the possibility of dealing with blight in your garden.

Pumpkin is also not a good companion plant to zucchini even though they belong to the same family. It may negatively affect growth because they can cross-pollinate, changing the look and taste of the fruit.

Both need plenty of room to grow, they will compete for the available area and pumpkins tend to be more aggressive and vigorous. Apart from space, they will also compete for water and nutrients in the soil. This is why pumpkins and zucchini plants should be in separate garden beds.

Lastly, we have fennel which is considered a poor companion plant to almost everything. Because of its strong aroma and flavor, it attracts beneficial insects to the garden like ladybugs, hoverflies, butterflies, and wasps, as well as strongly repel pests like acids and fleas.

However, it is not a suitable companion plant because it can impede the growth of other food garden plants like bush beans, kohlrabi, tomatoes, and others. It secretes a substance from its roots that inhibits the growth of plants close to it and can grow quite aggressively. It might be a good idea to also plant fennel away from your zucchini plant.

Can cucumber and zucchini grow together?

Cucumber, like zucchini, are from the same family and so some raise the issue of alteration by cross-pollination. According to IOWA State University, this is not true. Cross-pollination can only happen between the same species.

However, cucumber and zucchini both require a lot of space and may be prone to the same type of disease and pests. So consider these when planting them together.

Do tomatoes and zucchini grow well together?

Both tomato and zucchini are summer vegetables with similar growing conditions and so can be grown together. But take into account that both require a great deal of room to grow. 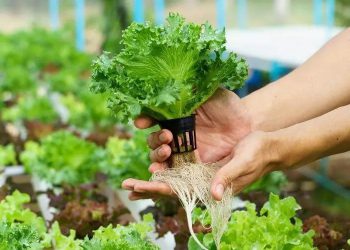 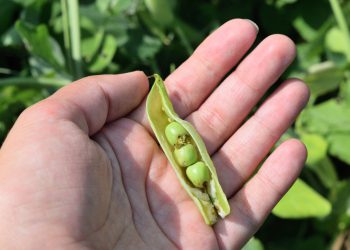 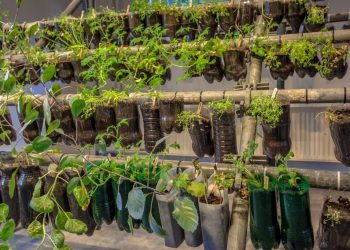 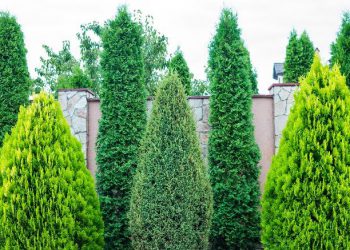 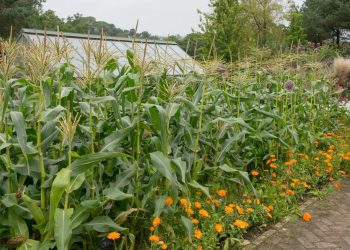 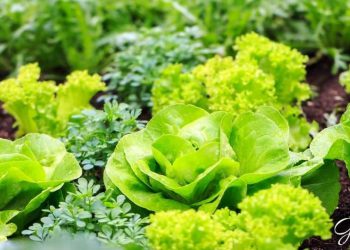